Kickin Up Lilacs "Yoda"            AKC Lilac                      CEA/CL Clear by Parentage
YODA is a gorgeous lilac rough coat standing 19".  He is the son of Arajoel Peanut Lilacgel and Cocoa Classic; grandson of Arajoel Haza Lilactri, a lilac tri from Australia. Yoda's parents have been tested OFA Good; CEA/CL Clear. His pedigree includes conformation champions CH Bayshores Hot Fudge Royale, CH Yarrancoly Kickin Up Dust, CH Yarrancoly Inya Dreams, CH Glentress Majestik Lord, CH Nahrof Moonlighting, and others.   Yoda has a delightful sweet personality with eyes that say "let's play". He loves to play soccer and will fetch about anything we throw or kick.  Yoda is always happy and makes you happy to just be around him. His puppies have his wonderful zest for life and lovable teddy-bear disposition.  Yoda's puppies make excellent companions as well as therapy and medical alert dogs.

Nitro is a gorgeous blue merle registered with the American Kennel Club (AKC).  Nitro is the grandson of Rockin G Spurs, the world's most winning cowdog from 1992 to 2005 and the GCCA Open Cowdog of the year in 1995, 1997, 200, and 2001 and Visions Out of a Dream who is major pointed in conformation.  Also in Nitro's pedigree are Bismark's Flying Colours and Hastings Liz, both producers of MACH champions in agility and flyball, and CH Borderwind Kentucky Gold an AKC American Champion.  Nitro's puppies have shown themselves to have easy going personalities which make wonderful pets and also possess the speed and athletic ability to excell at agility, flyball, and other sports.

Nightwind Xavi       AKC Blue merle
Xavi is a gorgeous blue merle boy. He is extremely athletic and agile.  His favorite trick is to dance on his hind legs as he follows along.  He is a happy-go-lucky boy.  He is especially attentive people and likes to do whatever they are doing. He follows us everywhere. 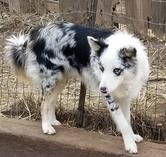 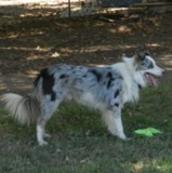 Smokin Gun "Smoke"             AKC Slate Blue Merle
SMOKE is a slate-blue merle dual registered with the American Kennel Club (AKC) and American Border Collie Association (ABCA).   Smoke's pedigree includes Imp. Taff, Abe, Imp. Spot , LML Jasper, BH Blue Heather, Silver Shadow, and Keeper One. Smoke is a gentle soul that likes people -- everyone is a friend to him.  He is especially tolerant of children and likes to be with and near people.  He puts this sweet personality on his puppies which make them excellent companions.  Smoke is also a very athletic boy, and his puppies are excellent prospects for agility, flyball, and other dog sports.  He is currently living a wonderful near Juneau, Alaska. 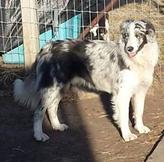 Vader is a handsome, traditionally marked silky-haired rough coat.  He is very people oriented and likes to do things with his people.  Vader's pedigree includes @@Hatsoff Bill (2000 LSCD Champion),  Davy (Int'l Sup Champion), BH Rowdy, and #Cap (Great Britain National Champion).  He is exceptionally athletic, fast, and quick.  Vader's puppies will make nice active active companions and will be excellent prospects for agility, flyball, disc dog and other sports.  Vader's pictures are when he was 8 weeks old.  We are working on getting updated pictures.

Rhaegar is a gorgeous blue merle boy with blue eyes. He's got a goofy persoality and loves to run and play. He is out of Nightshades and Firestorm lines. He descends from some great herding and agility lines. He  has tremendously athletic and fearless.

Drax is affectionate, intelligent, and athletic.  He is very obedient and wants to please and loves attention.   His sire is Echo of the Dragon King, a beautiful wild blue merle.  Drax's mother Rockin the Stars has several champions in her pedigree, Rockin G Spurs, a champion cowdog, CH Yarrancoly Kickin Up Dust, Lochinbrae Point of Grace, and Brooksbid Country Classic, conformation champions.  Drax's puppies should not only be great companions but also be good prospects for agility, flyball, disc dog, and other sports.

Orion is a gorgeous AKC blue merle.  Orion is the grandson of Maximum TNT, son of Rockin G Spurs, a world champion cowdog and Visions Out of a Dream who is major pointed in conformation.  Also in Orion's pedigree are Bismark's Flying Colours and Hastings Liz, both producers of MACH champions in agility and flyball, and CH Borderwind Kentucky Gold an AKC American Champion.  Orion's puppies are are people oriented with easy going personalities which make wonderful pets and also possess the speed and athletic ability to excell at agility, flyball, and other sports.